Why I Write In Evernote 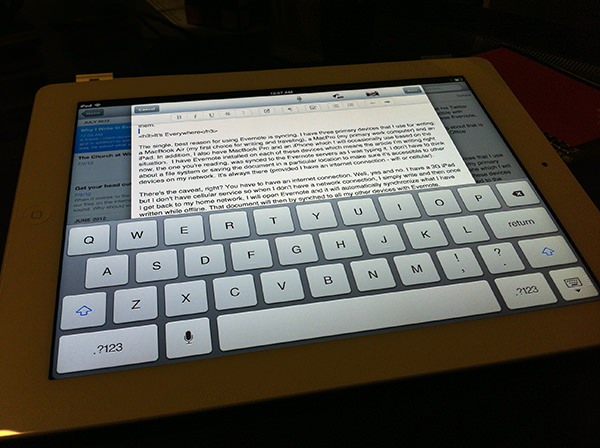 A friend / client recently received an iPad as a gift and in addition to asking what his Twitter password was, he asked what app he should use for writing. Something compatible with Microsoft Office. My recommendation, which I’ll outline the reasons for below, was Evernote.

If you are familiar with Evernote, you may be thinking, wait, what about Office compatibility? Well, the funny thing about that is that when it comes to writing, there are only a few things that really matter and Office compatibility is not one of them.

From the Evernote website, “Our goal at Evernote is to help the world remember everything, communicate effectively and get things done. From saving thoughts and ideas to preserving experiences to working efficiently with others, Evernote’s collection of apps make it easy to stay organized and productive.”

Essentially, it’s a note taking system, but that’s the simplified version of what Evernote is and can do.

The single, best reason for using Evernote is syncing. I have three primary devices that I use for writing; a MacBook Air (my first choice for writing and traveling), a MacPro (my primary work computer) and an iPad. In addition, I also have a MacBook Pro and an iPhone which I will occasionally use for writing based on the situation.  I have Evernote installed on each of these devices which means the article I’m writing right now, the one you’re reading, was synced to the Evernote servers and each of those devices as I was typing it. I don’t have to think about a file system or saving the document in a particular location to make sure it’s accessible to other devices on my network. It’s always there (provided I have an internet connection - wifi or cellular).

There’s the caveat, right? You have to have an internet connection. Well, yes and no. I have a 3G iPad but I don’t have cellular service so when I don’t have a network connection, I simply write and then once I get back to my home network, I will open Evernote and it will automatically synchronize what I have written while offline. That document will then by synced to all my other devices.

In addition to my files being everywhere, Evernote itself is available in just about every form you could ever need or want. Android? Check. Blackberry? Check. iOS? Windows Phone 7? Windows? Check, check, check. And if you don’t have your device but you are at the library or someone else’s computer and want to do a bit of work, you can access your Evernote account and files via the web.

Evernote is made up of Notes, Notebooks and Stacks of Notebooks. The article that I’m writing is a note. Whether it’s 750 words or 10 words, it’s still just a note in Evernote’s eyes. Notebooks contain, you guessed it, notes. A notebook can be either local or synchronized. A local notebook is a notebook in which the files are only available on the computer on which they were created. Synchronized notebooks are synced to all of your Evernote enabled devices. Finally, Stacks of Notebooks are notebooks that are grouped into a single stack. For example I have a “Writing” stack that includes the notebook “Future Articles” which includes the note “Why I Write In Evernote.” That’s the extent of the filesystem when it comes to Evernote. This is a great help in that it simplifies the mechanics of writing, all of the things that you have to do to prepare to write, allowing you to focus on the task at hand.

The idea of de-cluttering your interface or entering “Write Mode” as some apps call it, has really been gaining steam lately and reminds me of sitting down at a typewriter to write. Yes, I’ve used a typewriter before. Once. In a museum. For typewriters.

Apps like Pages have introduced write mode, in addition to a standard toolbar mode. Other apps like iA Writer (for Mac / iOS), Write Room (for Mac) and PlainText (for iOS) have streamlined the interface to the point where the act of writing is the singular focus. No formatting. Just writing.

The fact that mobile devices are essentially single window devices - meaning you only see one window at any given time - helps reinforce the act of writing, especially when combined with apps the remove the distractions of buttons, widgets and toggles.

Evernote, which doesn’t have a “Write Mode” does provide a clean interface for writing with minimal distractions. The note editor in the iPhone version fills the window while in the iPad version the editor floats above your notebooks. (See images below). Not 100% distraction free but good enough.

I know, you want to format your text. You want to use bold and underlines and colors! I’m cringing at your enthusiasm for formatting. Let me give you some advice. Skip the formatting. Just write. Don’t worry about how it looks. Those are just distractions from you getting your thoughts out of your head and into your notebook. There, I said it.

Now, about formatting. Here’s what you’ve got in Evernote but should never use;

Inspiration doesn’t work on a schedule. Did you ever see the “Heart Attack” episode of Seinfeld where Jerry comes up with a joke in the middle of the night and writes it down but can’t read his writing in the morning? “Salami, salami, bologna.” If Jerry had been using Evernote, he would have known what the joke was.

Occasionally, I’ll see something or think of something and I just need to jot it down. Since I almost always have my phone, I just open Evernote and either snap a picture, video, write a note or record a voice memo, right into my “Ideas” notebook. Later, I will flesh it out or realize how terrible of an idea it was. Either way, I’ve got it.

This is like an infomercial and now we’re at the part where the host asks how much you think you’d pay for something like this? I know, I know, you’d pay hundreds, no thousands of dollars per year for a system like this. And you’d be a little too happy to pay it, if you ask me. And now, the big reveal… it’s FREE! You heard me. Free. I guess the headline sort of stole my thunder.

What do you get for free? I’m glad you asked, the host with the teeth that are a bit too white, would say.

The free version of Evernote is more than likely going to be sufficient for most users needs. But, there are some important features that make the premium account a no-brainer.

PDF Search. Besides writing, I use Evernote for just about everything. Receipts, business cards that people give me, conference notes, ideas, discount codes, bills, medical info, you name it. The simplified file system is great, but human nature is to search. And since everything I scan in to Evernote is turned into a PDF, the ability to search within those scanned documents using the search box is a timesaver. I look at the paper files in the file cabinet and I think, what a waste of time and space. Trying to find something in there is like finding the proverbial needle in the haystack.

Revisions. I wasn’t even aware of the fact that Evernote kept revisions of the documents that you worked on, which you could go back and view. According to the Evernote documentation, “Several times each day, Evernote makes a copy of any notes in your account that have changed since the last time the system checked. This page allows you to view and export these previous versions of your notes. This feature is only available to Premium users.

Clicking on a note will show you the content of the saved version. You can copy and paste that content, if you wish. Alternatively, click Export to download the note. Once downloaded, the note can be imported using the Import option in the File menu of Evernote for Windows or Evernote for Mac.”

My advice would be to write in Evernote and if you must, copy and paste your unformatted text into your Office document and format to your heart’s content. I believe this will make you a more productive writer because you will be able to focus on the important part of the job, writing.

I’m sure that there are features that are deal-breaker, must have features for serious writers. I don’t know what they are. If you would like to provide a guest post, “Why I Would Never Write In Evernote” feel free to contact me on Twitter, @FirebrandMedia and we’ll work out the details.