Thanks to .net magazine, I’m able to attend South by Southwest in Austin, Texas. 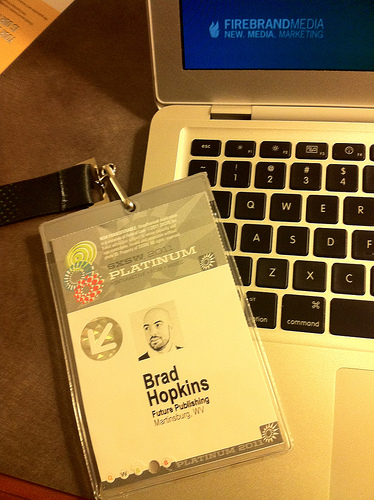 What is South by Southwest?

I told people that I was going to a conference which, for lack of a better term, was correct. In the traditional sense, I guess it is a conference since I anticipate listening to people talk for large chunks of the day. But it’s much more than that.

As a first time attendee and casual observer (via twitter) in years past, the size and scope of the event are a bit overwhelming. In anticipation of the event, I downloaded the SXSWgo app which I allowed me to browse and select topics of interest that I may like to attend. Talk about overload.  I think I selected 15 topics for a three hour time block. The number of interesting topics was both exciting and frustrating.  I wanted to attend everything.

I decided to narrow my focus to events within a certain proximity of the convention center, which was the main hub of activity.

Below, you will find the sessions that I was able to attend and the summary provided by sxsw. I’ll add my observations once I’ve had time to review my notes and think about SxSW as a whole.

How Many Rungs: Social Change and the engagement ladder

When it comes to giving, slacktivism versus “real” engagement is a false dichotomy. Critics need to get used to the idea that we live in a time of innovative new ways for people to get involved – including things that might not have qualified as “volunteering” or “donating” once upon a time.

Are big banks too big to…innovate? It’s clear that big banks have lost their innovative edge. Strict new government regulations and frustrated customers walking away haven’t even sparked creativity from them. Luckily for consumers, there is a new wave of financial service innovators pushing the limits. Incorporating cutting edge technology, social media and—believe it or not—genuine customer service, this new group of financial players are giving traditional banks a run for their money. The Banks: Innovate or Die! panel will discuss why big banks are failing with today’s Web 2.0 consumers, and will examine the new players in the space who are stealing customers away due to their innovation.

How social media fueled unrest in the Mideast

Join two New York Times reporters as they discuss the role of Facebook,  YouTube, Twitter, mobile, and citizen journalists during the popular uprisings that have swept through North Africa and the Middle East. What worked? What are some of the opportunities and potential pitfalls moving forward for human rights activists using social media tools?

Summary
The last decade was the decade of social. The coming one will be the decade of games. Over the past years, a few key companies have built, and now maintain, a powerful framework to foster digital connections between our friends, family and colleagues. What comes next is another framework, not another social layer, but a ‘game layer’. And it’ll be even bigger.

Explore an alternative approach to creating apps for iPhone and iPad. The free PhoneGap framework lets you build first-class native iPhone apps using just HTML, CSS, and JavaScript - a technique that also lets you create Android, Nokia, and Blackberry apps from the very same code base. Explore the pros and cons of this approach as you learn to create native-looking animations with jQTouch, complex UI elements with Sencha Touch, and hook into advanced iPhone features (accelerometer, GPS, vibration, and sound) without ever touching Objective-C.

Join marketing writers and humorists Steve Lundin and Richard Laermer for a rollicking conversation on some of the most notable examples of interactive marketing programs gone awry. These incredible, disturbing, and (unintentionally) hilarious stories will leave you scratching your head and wondering out loud: “someone actually approved AND paid for that?” From Edelman’s “WalMarting Across America” campaign that served to coin the phrase “Fake Weblog,” to Pepsi’s “Amp up before you score” social networking debacle, the world of interactive marketing has already yielded a rich crop of disasters to study. If anything can be learned from the numerous gaffes made by marketers, it’s that mistakes are repeated. They’re reported in the press and then disappear, rarely cited in marketing books or publications. Why? Because according to the former editor of B-to-B magazine, “we don’t like talking about the negative stuff.” In short, as far as the world of marketing is concerned, “all is always well.” The lessons that these stories impart are invaluable and should not only be repeated, but analyzed (and hopefully never repeated again). Interactive Marketing Horror Stories provides an in depth look expensive mistakes, coupled with an explanation of why they happened and what we as marketers can do to avoid them. This promises to be a fast moving and provocative conversation that will provide attendees with some of the most important information they can use: a way to avoid nightmares.