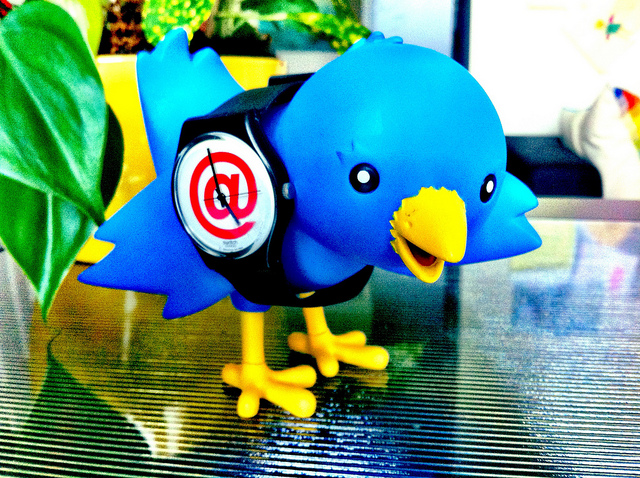 Twitter is spontaneous. Great food. Good parking space. Lousy service. Ridiculous hipster. The nature of twitter makes it natural to post a thought, a picture, a (short) rant. 140 characters is perfect for this kind of communication. It’s easy for an individual to be spontaneous but it’s harder for a business, what with those pesky business hours and all. Sometimes you need or want to post a tweet at some point in the future to coincide with a product launch, an event, while on vacation or because you anticipate needing an alibi when a risky business decision falls apart. So how do you do schedule spontaneity? Or, if not spontaneity, at least how do you schedule tweets? I’m glad you asked because it’s easy using Twuffer.

First, a couple caveats. If you are simply scheduling tweets and then ignoring your Twitter timeline the rest of the day… you’re doing it wrong. You need to be attentive to your Twitter followers. Social media is about two way communication.

I have two real-world examples of why you would want to schedule a tweet.

I own, run, and manage a site called InThePanhandle.com. This is a community website for the eastern panhandle of West Virginia and throughout the week I receive events to post on the site. Often, these events are well into the future and tweeting about them at the time of posting wouldn’t make much sense. My previous method for scheduling the promotion of the events was to flag them in my email client and then frequently check to see what needs promoted. This may have worked once but it was inefficient. Mostly, I missed the window to promote the event and had cluttered my in-box. In the back of my mind, I always wanted some way of scheduling tweets.

In speaking with friends, I knew that Hootsuite and TweetDeck offered this functionality but frankly, I hate the whole multi-column Twitter stream approach. I really prefer to view Twitter in Twitterrific, which I use on the desktop, iPhone and iPad so I decided to continue with my less than effective approach.

The second real-world example is from a client of mine, the Church at Martinsburg, @martinsburgch. They wanted to provide a daily scripture reading early each morning via twitter (and consequently Facebook since the accounts were connected).  They asked me if I knew of any service that would allow them to schedule posts and I really didn’t have any idea beyond Hootsuite. A quick search for “Twitter Scheduler” brought up some suggestions which I passed on to them to let them try out and find one that worked for them.

Within a day or two they had settled on Twuffer, a so-called, Twitter Buffer. On their recommendation, I decided to give it a try and have found it to be a good alternative to the solutions mentioned above.

The Twuffer interface makes it hard to mess up scheduling your tweets. First, you need to authorize the app using your Twitter account. Once logged in, you will then be prompted to set your timezone and decide whether or not to allow your tweets are displayed publicly on the Twuffer homepage.

First, you will type your tweet. While composing your tweet, a small pop-up will display how many characters you have left. Once you’ve completed your tweet you will then select the date and time for the tweet to be published.

That’s it. Your tweet will then be tweeted at the time specified. There are also tabs to see how many tweets you have entered, scheduled, sent and failed.  The Scheduled Tweets tab allows you to edit or remove any tweets that you have scheduled.

All in all, the service is easy to use and I have found it reliable.

The images below show some of the steps described above to authorize your account and schedule a tweet.